She is arguably gospel music’s greatest singer ever. Raised up through the legendary lineage of her mega-musical family tree, Priscilla “CeCe” Winans was born in Detroit during Motown’s heyday. Though the historic record company was making massive strides in the racial integration of pop music, Mom and Pop Winans filled their home with solely spiritual music—tuning the ten Winans siblings’ ears to the contemporary soul strains prescribed by the gospel music giants of the era like Andrae Crouch and Rance Allen.

Deeply influencing her own sonic trajectory, CeCe, in duet with her brother, BeBe, forged a chart-topping career in the predominantly white Christian music world in the 1980’s with their smooth grooves and easy listening harmonies, before diving headlong into mainstream soul circles with their platinum-selling R&B vocal mastery in the early 1990’s. By the end of the same decade, the GRAMMY-winning songstress had made a formidable career out of a string of best-selling solo records, cementing her place in gospel music history forever.

But for the last several years, there has remained a steady silence on the CeCe front—at least in terms of new recordings, until now. After a nine-year pause, Winans is back at center stage, accessing the fashionable sounds of her childhood with a foundational gospel message for a new generation of believers, once again commissioning the church with her award-winning pipes and wide open heartedness on a bold new set—Let Them Fall In Love (Pure Springs Gospel/Thirty Tigers Music—buy)—out now.

Here to talk us through the process of throwing’ it back into creating something new, please welcome the incomparable CeCe Winans.

CCM Magazine: We live in a culture where our messages are fairly ambiguous and convoluted. Throwing the record back sonically—was that a way of getting back to some sort of back-to-the-basics message spiritually as well?
CeCe Winans: When my son [Alvin Love III] came up with the vision of the throwback sound, he assured me that lyrically—and this was probably one of the things that won me over—we would be bold, really have songs of substance. We were purposeful with both, to have more of a throwback sound as well as going back to the old landmarks with lyrics.

CCM: When Alvin first approached you with the throwback idea, were you immediately on board?
CeCe: No. [Laughs] He had to convince his mother, his very strong mother. He said, “Mom, I know it seems like it’s out of style, but what’s out of style is in style. Young people love it. You’ll be relevant. And your old listeners will love it as well.” He started writing, I started listening to the music, and then I thought, “This is gonna’ be good.” But it took me a minute. We had—I won’t say arguments—passionate discussions. [Laughs] Of course, after he played me “Hey Devil,” I was sold. I love the attitude, the authority, while being wrapped up in fun.

The record label wanted me to do the same thing I had done before, what I’m known for, more of a worshipful style, but I wanted to do something different. After discussing the throwback [sound] with Alvin and really talking about the whole project as a work of art, a work that would offer different styles of music but yet had that strong, precise and cohesive thread going through it, I think we did it. God did it. He did it.

CCM: I saw you in concert when I was maybe 10 or 11, and I remember thinking, “Man, can she sing,” and not necessarily having heard what you do live on the radio or on a record. On this album you really were able to sing, some of that live CeCe sound. Did you feel that way?
CeCe: You sound like my son. Should I get into an argument with you? [Laughs] It’s amazing you’re saying that, because those are his words exactly. He would hear me live, and then he would hear me on the records, and he said, “You never really even sing on your records.” I’m like, “What are you talking about? I do sing. Live is just something different.” He said, “I want to capture what I hear live. I know your voice. I want to put these songs in keys that are going to make you work.” I’ll just humble myself and let him know what you said so that he’ll know that he did it. [Laughs] I get it now. This is definitely my first record that we have the live feel through it all.

CCM: You referenced “Hey Devil,” a dynamite track featuring The Clark Sisters. Lyrically, it is so bold and straightforward. Hell and the devil have become taboo subjects in my generation of Christians. Was this at all a thoughtful response to that?
CeCe: I’ve never been ashamed of who I am or what I stand for. I believe in the whole Bible, the part that talks about heaven and the part that talks about hell. We are missing the fear of God—not to be afraid of Him, but to be reverent of Him, to really understand who He is.

I remember as a kid, they taught on hell enough for me to say, “I don’t want to go there.” I got saved. It worked for me as a kid and as a teenager, but it wasn’t until later that I found out about the love of God. As I began to walk with the Lord, I understood that it’s the love of God that keeps you and it’s the fear of God that disciplines your life so you have the desire to please Him.

It’s been nine years [since my last record] and, boy, have things changed. I was excited about coming back bold. Yeah, I want to get their attention with great music, but let them continue to sing these lyrics over and over again, and understand Your power and Your love and Your grace and Your mercy and the authority that we have in You. 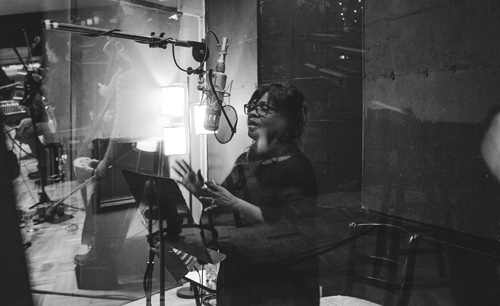 CCM: Is some of this boldness in your lyrics and message coming from the time you have spent over the past several years in ministry with your husband in your local congregation?
CeCe: It could be. I hope, the older I get, I become wiser. When we realized the Lord wanted us to start a church, we thought, “You’ve got to be kidding.” We’ve made church real complicated, and church is pretty simple—it’s loving God, loving people, and making disciples.

We can enjoy that Sunday service, but what do our lives look like throughout the week? I have learned we have to teach people how to live this abundant life, how to live a life that’s pleasing to God, and you do that by making choices that will bring God glory on every level every day—if that means paying your taxes or saying, “I’m sorry,” or being faithful to service.

I’m a shepherd now. I have to set the example for those who are coming behind me. It’s no longer about me. It’s funny, even since the record has been out, every time something happens, I call my son and I’m so happy for him. I forget that it’s my record. I have a church full of Millennials, ages between 20 and 30, and so I want them to understand that you don’t have to compromise to succeed in life. If you’re going to have good success, then live a life that’s pleasing to the Father—your relationships, how you speak to people, how you treat people.

God paid the price so that everybody would be saved. We are here to represent Him, and that’s a heavy responsibility, so we’re here to give you God’s Word and only God’s Word. If you like it, great. If you don’t, hey, I’m praying for you. His Word offends all of us sometimes, but we have to be wise enough to say, “Yes, You’re God. You’re the potter and I’m the clay.” When you listen to “Lowly,” that’s me encouraging somebody…

CCM: … to be humble. That is a super hip track, but I thought, “She’s just telling it like it is.” We live in this culture of what I call, “one-way communion.” We post something or update our status, but we often miss out on a face-to-face relationship with one another. How do we achieve humility, if we’re just strangers in the night?
CeCe: You don’t. The word “submission” is almost a bad word in this generation. Submission is protection. Submission is wisdom. Growing up, I owe everything to the part we allowed mothers and ministers to play in our lives. When they would say, “No, you’re wrong.” “Sit down.” “You need to do this.” And I listened. Thank God I listened and submitted, and because of that, God has protected me. He’s honored me.

When I say you guys are amazing, this younger generation now, if they get lined up right, it’s going to be serious revival. They want the real deal; they don’t want halfway. I’m finding out that this generation wants to see a move of God. They don’t want it to be sugarcoated. It’s pretty awesome, but they have to be taught the beauty of submission.

CCM: Growing up, your music transcended cultural and racial barriers for me, and was one of my first introductions to black music. Has this always been an intentional part of your platform, to be this bridge between different races, cultures, and classes through music?
CeCe: It was just a byproduct of what we did. We were from Detroit, so Motown was around us, but my parents didn’t allow us to listen to secular music. So we found incredible gospel music—Andraé Crouch and Rance Allen. We heard very contemporary, very soulful gospel music. So when I started recording at 17, we were just young people who liked hip music. We didn’t think it was anything new or different.

It wasn’t until we were on the charts that people started asking, “Wow, this is gospel music?” Even now you listen to Andrae’s music and think, “Wow, he created this way back then?” His professionalism and production was always second to none, so we came out of the box wanting to make sure our production was just as good as anybody else on the radio and then just expressing ourselves the way we expressed ourselves. We never thought we would create this thing that would connect and show people how gospel music could be done.

Buy the CD : Let Them Fall in Love

This article is powered by www.ccmmagazine.com

The generous soul will be made rich, And he who waters will also be watered himself. – Proverbs 11:25

Southern Colorado has been rocked by teen suicides recently, and it’s been devastating. Our sons go to school in a district that has faced three student suicides in the past two weeks. During the last…
Read More

© 2017. All Rights Reserved. a part of the Gravenberch Foundation